We're proud to announce the next major release of StrykerJS: 5.0. With a name change, a new dimension in your report, a new way to discover files, updated mutators, quality of life improvements, and minor bug fixes.

If you're new to mutation testing, it's a way to measure your tests' effectiveness. A mutation testing framework will make small changes, called mutants, one by one in your source code. Then it will run your tests to see if one of them fails. If so, you just "killed" that mutant; if not, it "survived". If too many mutants survive, you probably want to improve your tests. The mutation testing report will give you insides into the test cases you may have missed. If this all sounds complicated, please take a look at our RoboBar 🤖🍷 example.

If you're new to StrykerJS, please follow our Getting started guide. Are you already using StrykerJS? Update to the latest version with your package manager of choice.

Don't forget to do the same for any plugins you might be using. For example,

With that out of the way, let's dive into the new stuff!

That's right. We've rebranded 'Stryker for JavaScript and friends' as simply StrykerJS. This change makes it easier to distinguish StrykerJS from other frameworks in the Stryker family (Stryker.NET and Stryker4s). It also allows for better use of Twitter real estate 😊.

Don't worry; the names of the NPM packages haven't changed. So it is purely a branding thing.

The mutation test report has always been the bread and butter of Stryker. Either in your browser or console, it is where you find out where the killed and survived mutants are. But the next question you might ask is: which tests were responsible? Stryker knows but wasn't telling you. Until now! 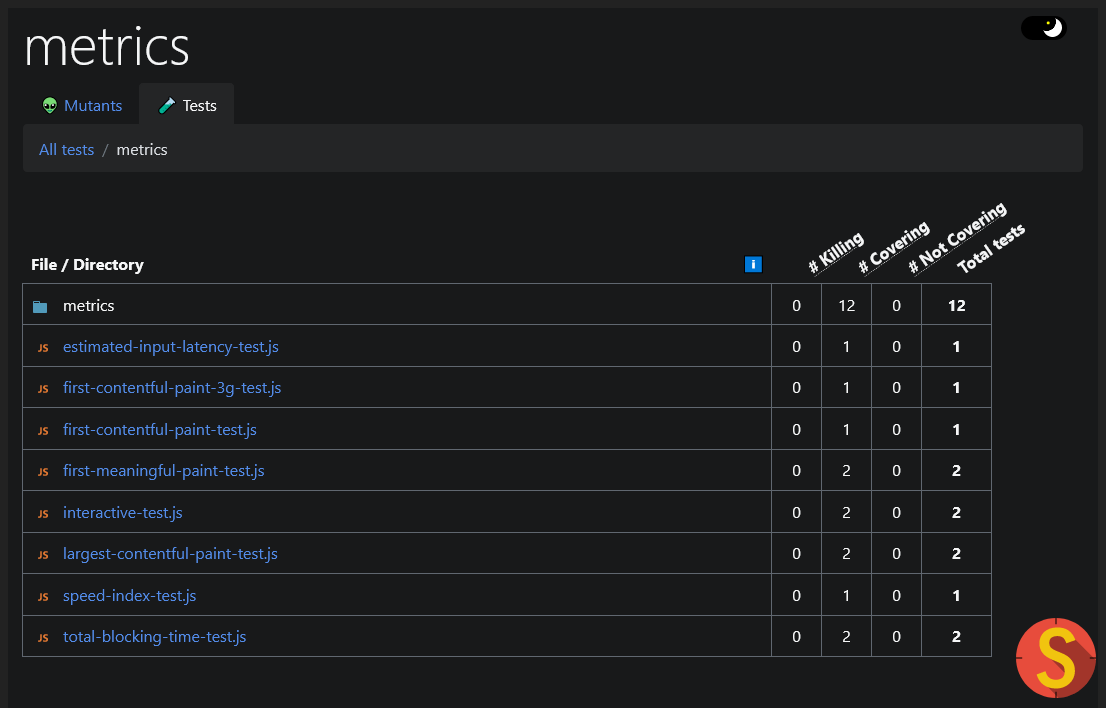 Or using the clear-text reporter:

The test view tells you at a glance which tests are killing mutants, which are merely covering mutants (without killing) and which are not covering any mutants. Furthermore, you can determine which mutants were covered or killed by that particular test case. Finding out so much information about your tests has never been this easy!

A couple of caveats to point out:

StrykerJS typically doesn't mutate your files directly. Instead, it creates a copy inside a sandbox directory, usually located at .stryker-tmp/sandbox-123456. However, it won't copy over all files there to save time. Stryker used to rely on git to decide which files to copy. Any .gitignored files would not be copied.

There were some issues with this approach. First of all, it required your project to be located in a git repository, and you needed to have git installed. And then, there are also examples of test suites that need some .gitignored files to run, like .env.

To combat these issues, StrykerJS 5 will no longer use git for file discovery. Instead, it will include all files while ignoring some standard patterns, like "node_modules". You can remove more files by specifying patterns in the new ignorePatterns configuration option. For example:

StrykerJS also allows you to specify files, which does the opposite of ignorePatterns, namely, you select the files you need to run your tests. Painstakenly whitelisting each file is more time-consuming and prone to error; that's why we've decided to deprecate files in favor of ignorePatterns.

Are you currently using files? You can probably remove files, and Stryker will still work. Or, if you still prefer the whitelisting method, you can achieve this like so:

We've decided to add a new variant to the logical operator mutator. It now also mutates the nullish coalescing operator (??).

To kill this mutant, you will need to write a test for both branches of the operator. Like you already needed to do for the logical OR (||) and logical AND (&&) operators.

We're also in the process of adding a new optional chaining mutator, but that didn't make it in time for this release.

A quick plug: as of version 4.4, StrykerJS will also mutate your /regex/s. For example:

Coverage analysis is a feature that makes StrykerJS run faster because it will run fewer tests per mutant. In its strongest setting, "coverageAnalysis": "perTest", it will only run the exact tests that are covering a mutant. Whether or not you are able to use this feature depends on your test suite and test runner, see coverage analysis in configuration for more details.

Since v4.3, @stryker-mutator/jest-runner also supports this setting. Now that all officially supported test runners support coverage analysis, it was time to make perTest the default setting. So we did. You can still disable it with "coverageAnalysis": "off"

We once again chose to improve the maintainability of the Stryker code base.

The Reporter plugin API has gotten an overhaul. It is now more in line with mutation-testing-elements

Stryker uses worker processes to run tests and check mutants for type errors. These workers receive any options via a message. Stryker used the surrial package to serialize complex objects like RegExp, functions, and even classes. This hidden feature was rarely used and not a good practice in hindsight. StrykerJS 5 replaces this with plain old JSON.stringify and JSON.parse. Don't worry, you get a warning if you configure something that isn't serializable.

Thanks to everyone for your continued support! Have questions or issues? Don't hesitate to contact us in Slack, on Twitter or open an issue.