We're proud to announce the first major release of Stryker.NET: 1.0. It comes with exciting new features and an overhaul of how you interact with the Stryker CLI. With the release of Stryker 1.0, we wanted to create a cohesive and intuitive user experience.

If you're new to mutation testing, it's a way to measure your tests' effectiveness. A mutation testing framework will make small changes, called mutants, one by one in your source code. Then it will run your tests to see if one of them fails. If so, you just "killed" that mutant; if not, it "survived". If too many mutants survive, you probably want to improve your tests. The mutation testing report will give you insides into the test cases you may have missed. If this all sounds complicated, please take a look at our RoboBar 🤖🍷 example.

If you're new to Stryker.NET, please follow our Getting started guide. Are you already using Stryker.NET? Update to the latest version with the following command:

With that out of the way, let's dive into the new stuff!

This update should have some performance benefits, and it will help with developing Stryker.NET in the future.

Please download and install .NET 5.0 or update your pipeline to support .NET 5.

Note that you do not have to update your application to use dotnet 5. Dotnet 5 is only a runtime requirement for Stryker to be able to run on your system.

Most options have been renamed or work differently.

A fundamental difference is how you pass multi-value options from the command line.

The old annotation for passing multi-value options was confusing and not based on any standards. For example, this is how you provided multiple reporters pre 1.0 👎

❌ means the option has been removed.

This release comes packed with new features! Let's walk through them all:

We introduced a new mutator that removes statements that otherwise would have been untouched by other mutators. 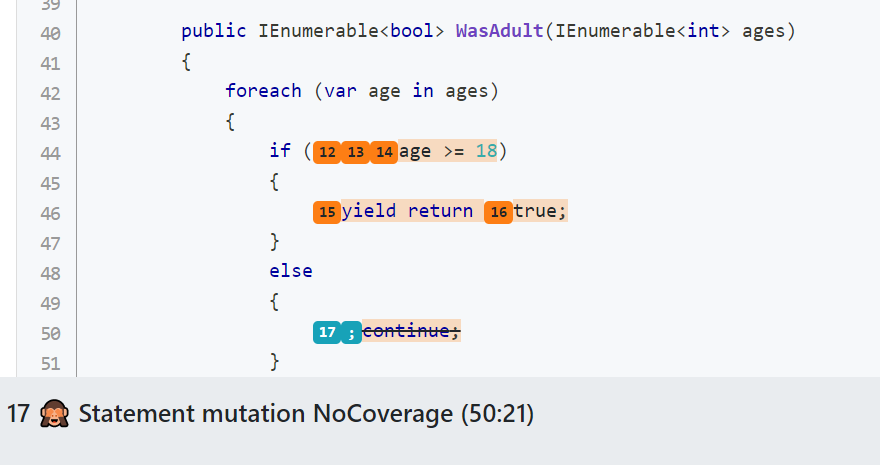 The mutator will remove the following statements:

It's now allowed to start a mutation test run even with failing tests. Stryker will try to make the best of the situation by marking mutants covered by initially failing tests as survived.

It's now possible to filter mutants at the source code level using special comments. This filtering gives the most fine-grained level of control.

The syntax for the comments is: Stryker [disable|restore][once][all| mutator list][: reason for disabling]

// Stryker disable all Disables all mutants from that line on.

// Stryker restore all re-enables all mutants from that line on.

// Stryker disable once all will only disable mutants on the next line.

// Stryker disable once Arithmetic,Update will only disable Arithmetic and Update mutants on the next line

Note that this feature is scope aware. If you disable mutators inside a method, the scope will not leak outside the method, even if there is more code below.

Note: this only works for Linq mutations for now, but we plan to bring this functionality to all mutations.

By default Stryker tries to auto-discover MSBuild on your system. However, if Stryker fails to discover the correct MSBuild, you may manually supply the path with this option.

If the project targets multiple frameworks, it is now possible to specify the particular framework to build against. If you set a non-existent target, Stryker will build the project against a random one (or the only one if so).

A long-awaited feature has finally found its way into Stryker! It is now possible to exclude some test cases. So, for example, if you have long-running integration tests in your unit test project, they can be disabled for Stryker, improving the performance.

Use Source Link for dashboard reporter​

Filling all settings to use the dashboard reporter could be a bit of a hassle. However, thanks to Source Link, the repository URL and the full version (including the git SHA1) of a project can be included in the produced assembly.

Stryker now uses the information computed by SourceLink to automatically retrieve the project name (github.com/organization/project) and project version, both of which are requirements for the dashboard reporter.

Enable this by adding the following to your .csproj:

Finally the last missing "common" mutation is added to Stryker.NET! Block removal mutations empty every block statement in your code. This means method bodies or statement bodies (if, while, for). With this mutation Stryker will have improved coverage on your complete codebase. Every method will have at least one mutation and thus should have at least one test.

No more mutated assembly on disk after Stryker run​

We welcome Cyrille DUPUYDAUBY to the team! They have supported us with feedback, testing, and development since 2018. It was long past due that we officially recognized their contributions to the project!

Special thanks to Cyrille DUPUYDAUBY, Peter Semkin, Philip Rowan, Corentin Altepe, Cédric Luthi, Gregory Bell, John McGlynn, Beatrice Forslund, dukedagmor and anyone else we may have missed for their efforts to make this release happen 👏 We truly appreciate all the help and feedback we receive!